The soils maps are a great resource for all trades that includes the opportunity for you to determine the value of a particular farm, gathering soil information for managing cropland/rangeland, or even researching potential building site subsoil features. Soil Maps provide up-to-date data for the Continental U.S.. Generally, the soils data is updated in late fall of every year. Our Soil Maps are unique in that they allow for inclusion of many different types of data all on one map. Access the CSR and CSR2 for Iowa, Bulletin 811 for Illinois, NCCPI for the continental US, Soil Features and classifications, and the Productivity Index for North Dakota, South Dakota, and Minnesota. Archived soil data is at hand for you as well.

When you look at the information below you will also see that the algorithims used to measure the probability of soil performance can be different from one state to another. The NCCPI, which is mentioned below, is an indicator that we could see that adopted and applied throughout the U.S. one day.

With a nod to the Soil Scientists and the technicians that continue to study the soil structure and all of its attributes that is then applied for measuring for example if a soils structure has stability to say for you or I to have a basement foundation for a home or to provide crop output based on the characteristics of the soil.

The Iowa Corn Suitability Rating (CSR) originally developed in 1971 is an index procedure to rate each different kind of soil for its potential ability to produce corn. The CSR Rating is intended to measure one soil’s yield potential against another over time. All soils start at 100 and points are deducted for land conditions such as slope, water and climate. 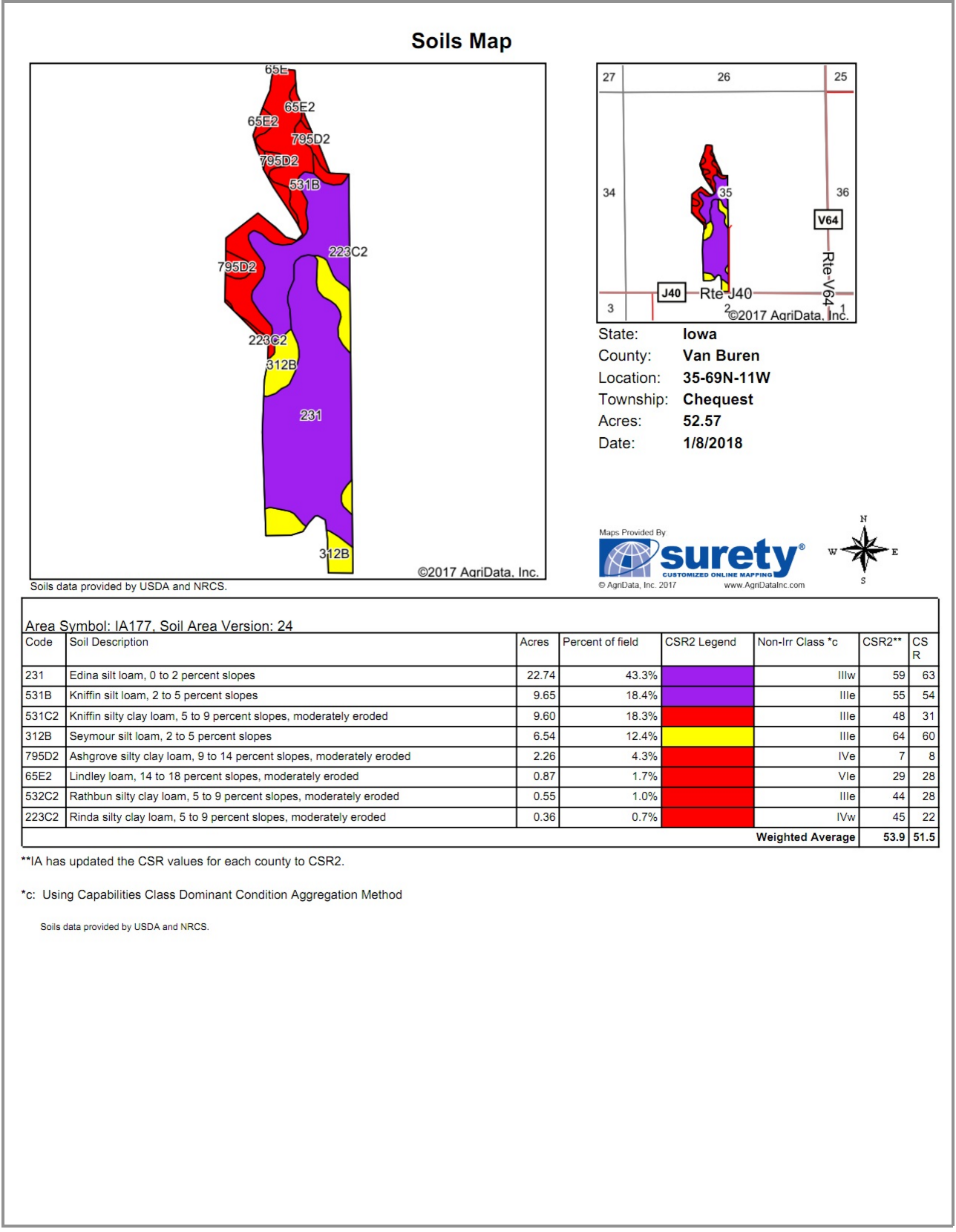 In the summer of 2012, the USDA NRCS began replacing the CSR values with CSR2 values developed at Iowa State University. CSR2 is an effort to make ratings more consistent, easier to calculate and the values more transparent to the public. As in the original CSR, the CSR 2 starts each soil at a rating of 100 and deducts points for each parameter. The CSR 2 uses six different parameters to determine the soil rating: Subgroup class of the soil, family particle-size class, field conditions of the particular Soil Map Unit (slope, flooding, topsoil thickness, etc.), water holding capacity, soil depth & erosion, and an expert judgement correction. Unlike the original CSR, climate does not play a factor within the CSR 2 ratings. For more information refer to the following:

Explanation of the original CSR:
http://www.extension.iastate.edu/Publications/PM1168.pdf

In order to assist in the transition from CSR to CSR2, Surety® Soils Maps will continue to provide the original CSR values for the foreseeable future. 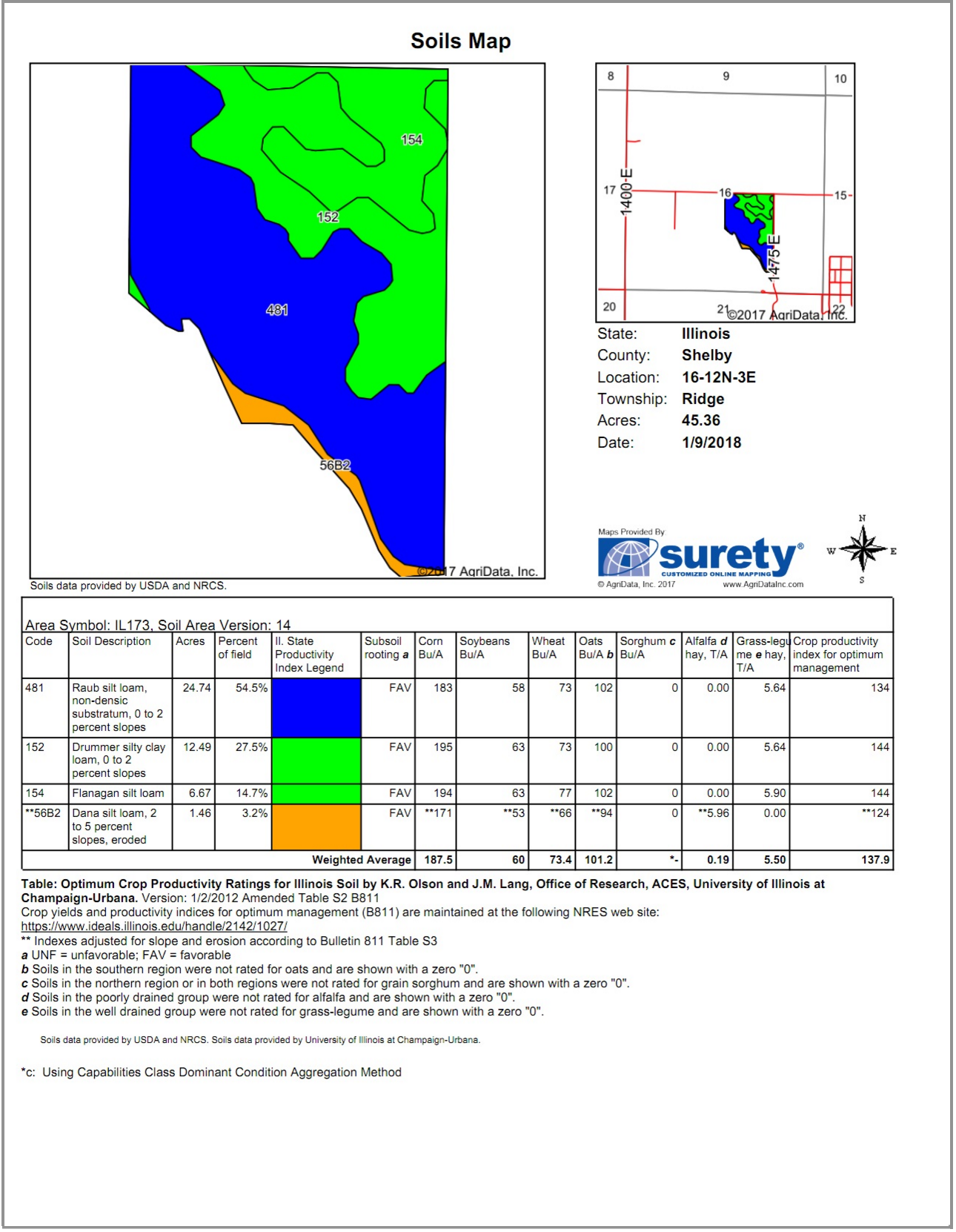 The Bulletin 811 was developed by the University of Illinois to provide crop yields and productivity indices under an optimum level of management. Optimum management criterion was determined by the yields achieved by the top 16% of farmers. The optimum productivity index (PI) can be used to determine the prime agricultural class of any soil type in the state. The rating system determines an A, B, and C class of soil.

Productivity ratings of 133-147 represent Class A, 117-132 represent Class B, and ratings of 100-116 represent class C. Any soil types with a rating between 47-99 are placed in the Other Agricultural Land Class and are not considered prime agricultural land. Bulletin 811 data initially was collected and presented in the year 2000 but has been revised and updated in 2012.

More information on the Bulletin 811:
http://soilproductivity.nres.illinois.edu/

The PI is exclusively available in North Dakota, South Dakota and Minnesota. The NRCS productivity index (PI) model is a derived measure of soil productivity that gives a productivity value to the soil on a 0(worst)-100(best) rating scale. The Productivity Index model assumes that crop yield is a function of root development, which in turn is controlled by the soil environment. 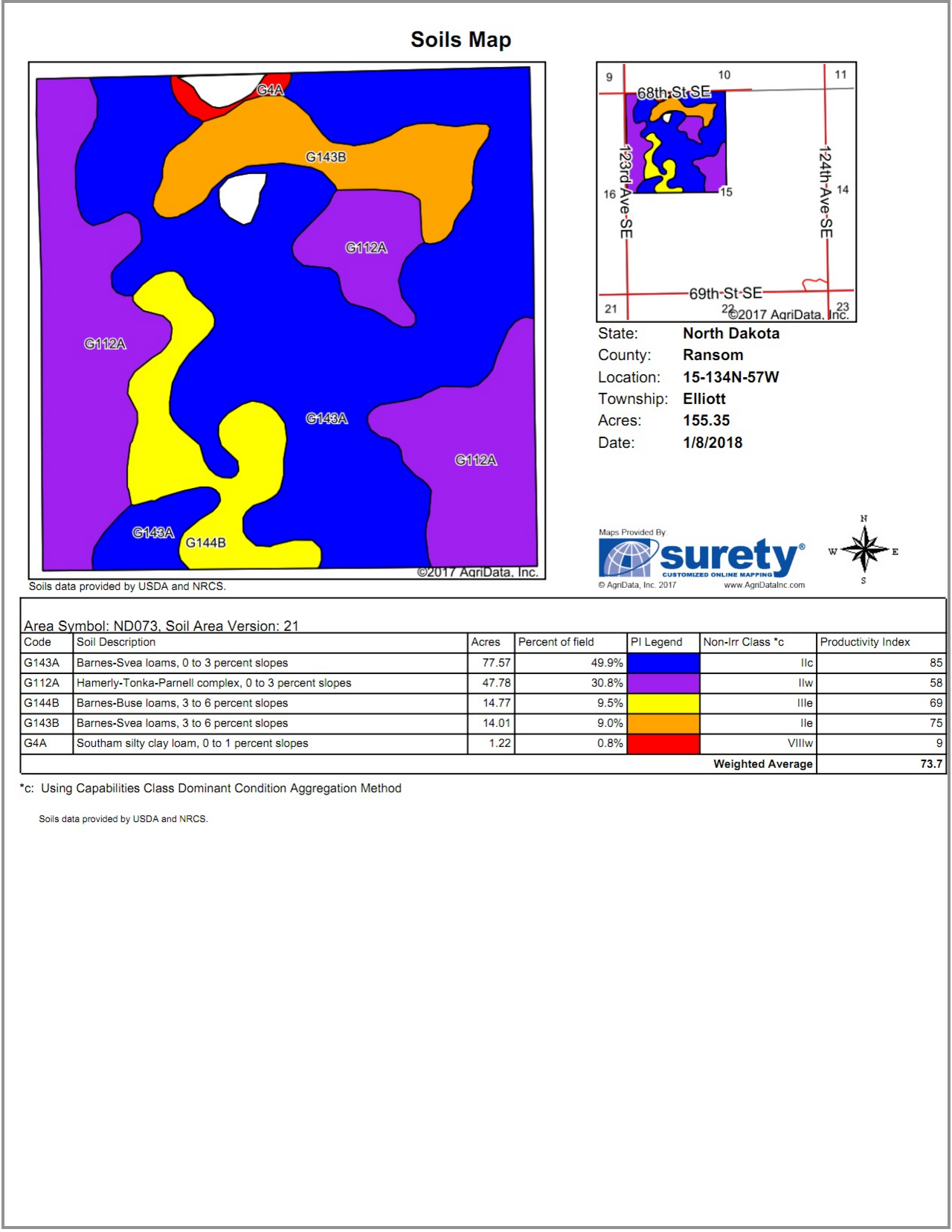 There are 5 assumptions made when the soils are given a rating. (Soil Survey Staff)

The advantage of a Productivity index is while Crop Yield averages will increase over time, index ratings will remain consistent in relation to one another. It is worth mentioning that these PI ratings are not interchangeable between ND, SD, and MN state lines due to the fact the each values takes into account its surrounding area of values.

Previously, soils maps in Nebraska used the SRPG Rating, which was developed by USDA-NRCS staff members to rate soils suitability for plant growth at the county level. SRPG is based on twenty-five soil properties and landscape features. The system rates the major soil characteristics (physical, chemical, and biological) that are important for crop growth. SRPG is no longer supported or being updated by the Nebraska NRCS. It is recommended to use the NCCPI rating.

Irrigated and Non-Irrigated Class and Subclass 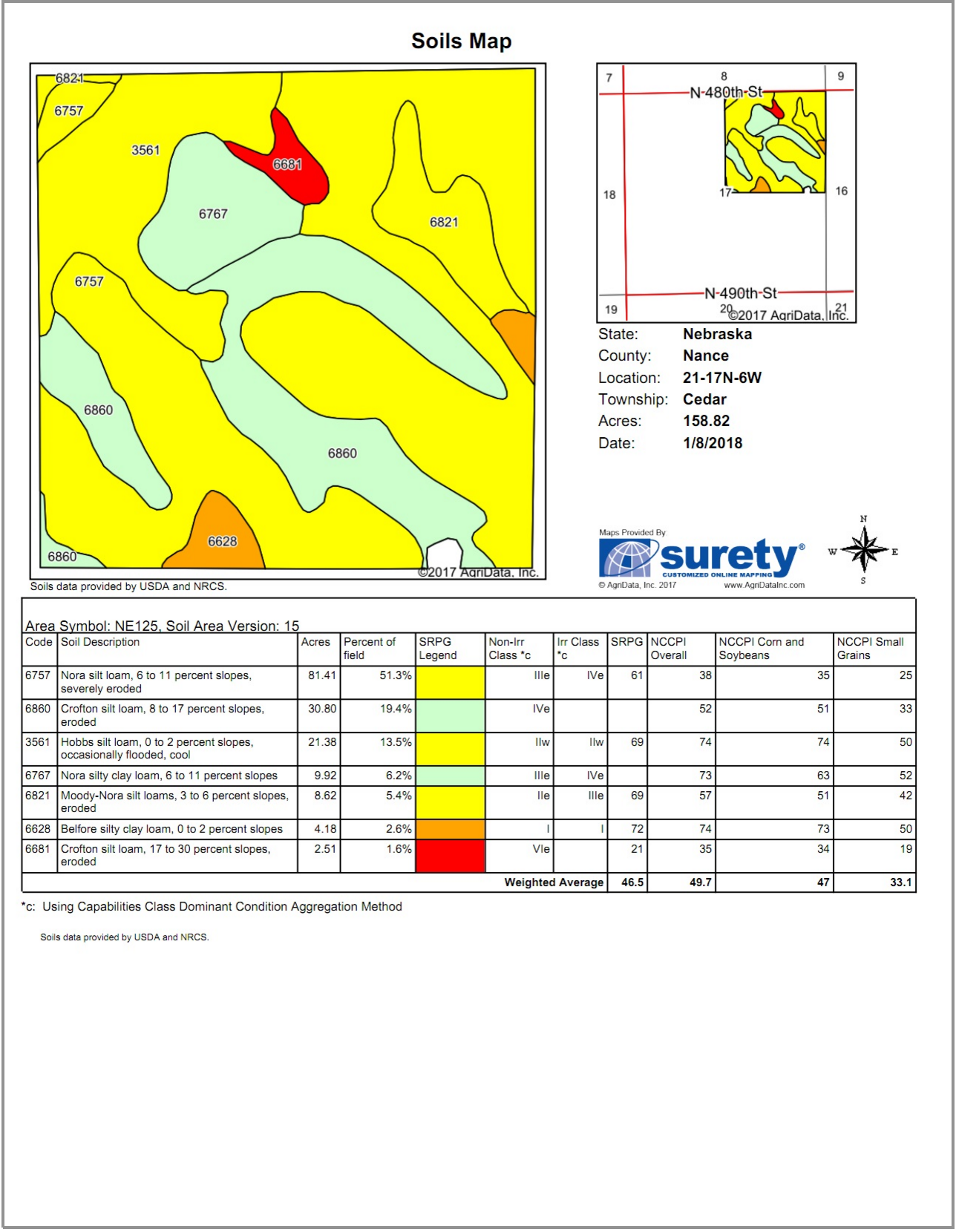 Land capability classification is a system of grouping soils primarily on the basis of their capability to produce common cultivated crops and pasture plants without deteriorating over a long period of time. This system is broken down into 3 levels; Capability Class, Subclass, and Unit. Surety® Soil maps display the capability class and the subclass.

Capability Class is designated by a progressive numbering system. The higher the number the greater the limitations are and the narrower the choices for particular use.

Capability Subclass are soil groups within each class that define that soils main limitation. These subgroups are defined by the addition of a small letter (e, w, s, or c) to the class numeral.

Note that Class 1 soils are thought to contain few if any limitations and thus do not include a subclass.

Class 5 soils can only have “w, “s”, or “c” subclass because class 5 soils are subject to little or no erosion. Class 5 soils do have other limitations that restrict their use to pasture, rangeland forestland, or wildlife habitat.

Crop yield ratings from the Natural Resources Conservation Service (NRCS) provide a relative ranking of soils based on their potential for intensive crop production. An index can be used to rate the potential yield of one soil against that of another over a period of time. Surety's® Soils Map allows you the option to customize, which crop types you wish to include in your reports.

With the rapid advancement of farming technology, the NRCS has determined that it is no longer possible to maintain Crop Yield values for each soil type and thus will be removing them from the database over time.

The National Commodity Crop Productivity Index is a national soil productivity model that is intended to be applied across state lines. The different factors that determine the NCCPI rating consist of the soil, landscape, and climate. This rating system is currently only applied to non-irrigated/ dryland agriculture. The NRCS stresses that this is not intended to replace any current state-specific productivity rating system. However, the NE NRCS has advised to use the NCCPI in place of the outdated NE SRPG.

Soil Features contain properties and other information about the soils that are not exclusive to the productivity of the soil. This information includes Water Table Depth, Restrictive Layer Depth, Septic Limits, Foundation Limits, and Drainage Class.